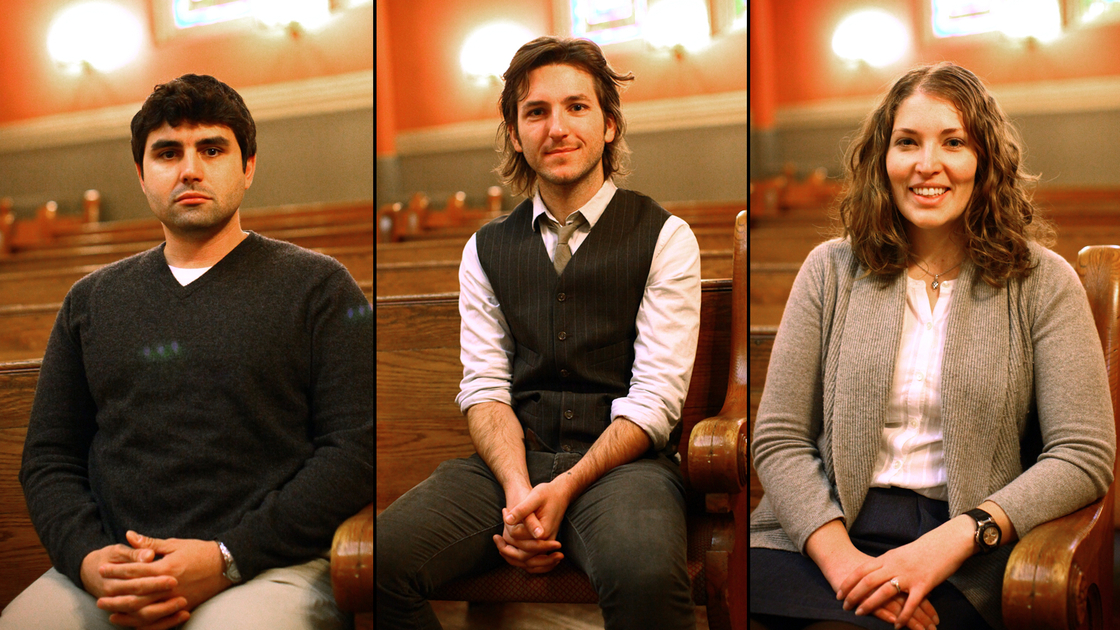 Giving Up Grief for Lent: A Lenten Blog Series that explores the things the Mainline church needs to grieve in order to embrace a new Easter reality … Rigoberto Perez (from left), Kyle Simpson and Miriam Nissly participated in a roundtable discussion about religion with NPR’s David Greene at the Sixth & I Historic Synagogue.

These words from Rigoberto Perez, 30, interviewed for a recent National Public Radio series, Losing our Religion, are what most churchgoing parents and grandparents fear hearing most from their young adult children.

The NPR series put a face to statistics released by the Pew Research Center that revealed that 32 percent of young adults did not affiliate with any organized religion. They interviewed six young adults in their 20s and 30s who had varying connections to the religious traditions in which they were raised. As the interviewer dug deeper, it became clear that these young people were not indifferent or even hostile toward religion. They all wanted to believe in God and, to some degree, be part of a faithful community. They struggled faithfully with the big questions, but did not find space in organized religion to do so.

Their faithful questions were often shaped by family tragedy. In the case of Liz Reeves, 23, losing her brother to cancer forced her to think more deeply about what she believed about God and an afterlife: Lizz Reeves (from left), Yusuf Ahmad and Melissa Adelman also participated in the discussion about religion with NPR.

“I wanted so badly to believe in God and in heaven, and that’s where [my brother] was going. I wanted to have some sort of purpose and meaning associated with his passing. And ultimately the more time I spent thinking about it, I realized the purpose and meaning of his life had nothing to do with heaven, but it had to do with how I could make choices in my life that give his life meaning. And that had a lot more weight with me than any kind of faith in anything else.”

Reading these statistics and hearing these interviews are a painful reminder of what the church has lost in the past five decades. Instead of going to the church, the synagogue or the mosque to grapple with these questions and to find supportive community, young adults now go elsewhere to explore these big questions. No longer is the faith community the center of all community in the U.S.

But, perhaps the grief is misplaced. Instead of mourning the loss of cultural influence, churchgoers should be mourning the loss of a faith community that has strong enough theology and relationships with young people to hold these serious and important questions in tension. If you are part of a faith community, use this Lenten time to dig deep into the hard questions. Find some time and space to have a conversation with a young person about the tough stuff. Share your stories of grief and loss that helped shape your faith. Invite them to tell theirs.

For resources on how to integrate these questions into your Sunday worship service this week using Isaiah 55: 1-13, see my page, Giving Up Grief for Lent: Resources.