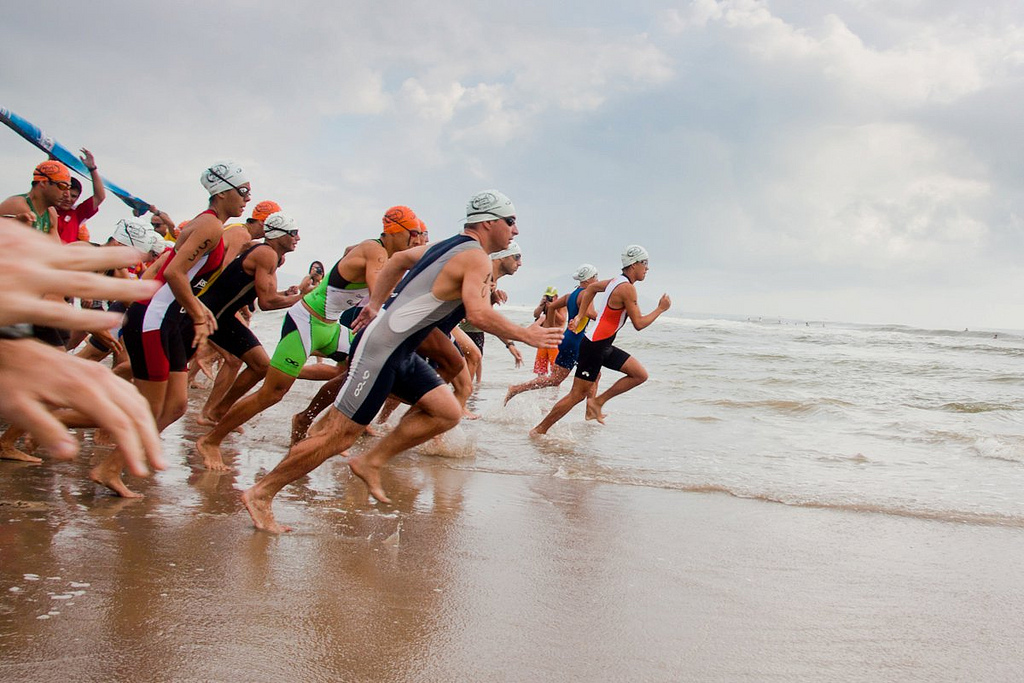 This blog is written for my occasional series, “Things Yoga Has Taught Me About Church.”

You make friends fast when you line up at dawn in your spandex triathlon gear on a gorgeous, but chilly, Sunday summer morning.

Having the unfortunate luck of being last in the line of about 1,000 participants, I struck up conversation with my fellow racers who were also participating in a race in Columbus, OH.

Goggles and swim cap clasped nervously in her hand, one woman confessed that this was her first race. She feared the open water swim and the hills she discovered were on the bike course. Two women standing near us allayed her fears. Glancing at their legs, I noticed their ages written in permanent marker on their left calves — 64 and 68. (It’s a weird triathlon rule.) The first woman, spunky and petite, shared that she had only two goals in this and every race she did — to finish and to not get injured. The other older woman, obviously her friend, agreed and started to talk about the time she had speed walked an ultra marathon (50k) and came in DFL (Dead F@*%g Last). She did win her category, though. She was the only speed walker. The first woman (the 68-year-old, I think) then said, “I just want to stay in good enough shape to do one of these [triathlons] a year.”

These are my people.

This is not always the way in the church.

Having visited hundreds of churches, I have often observed people who actively resist changes to buildings, programs and worship. They come for a sense of stability. Worship, Sunday school and community outreach should always stay the same and cater to the needs of people already in the congregation. I understand — who wants to be challenged in church when life is challenging enough? There are days when I have to go to yoga and lay like a puddle on my mat because life is just too much.

But, at what point does the comfort and continuity stunt our growth? If we only come for a sense of stabilty, how can we challenge ourselves to do the messy work of embodying our faith in daily life? When can we be in relationship with people who model for us a life-long growing faith? How do we learn to live with an ever-changing church community that reflects the people in our neighborhoods (even when people aren’t like us)?

I am not doing my yoga practice or triathlons the same way I did when I started. I shouldn’t be living my faith the same way either.