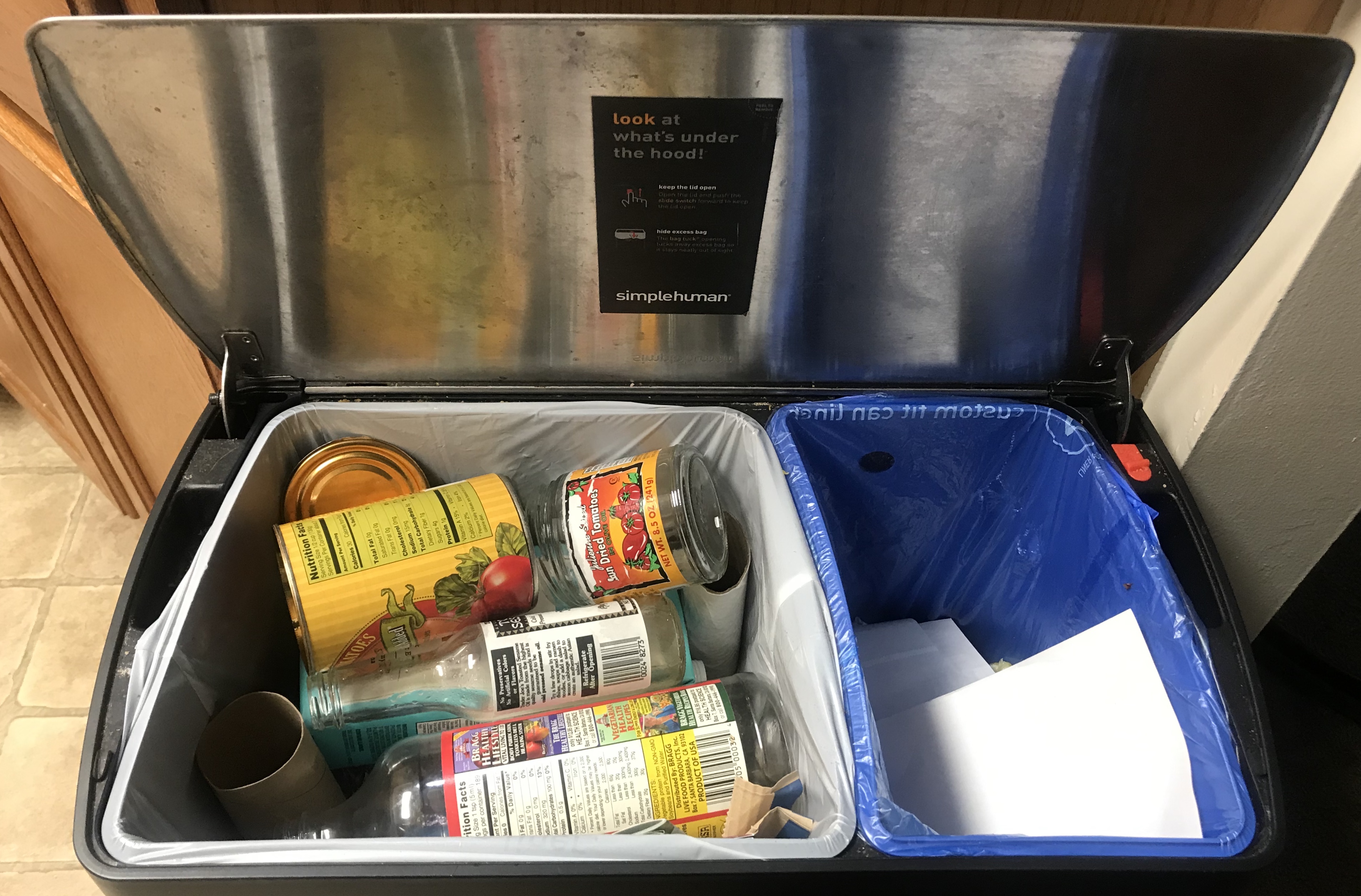 From the beginning, it did not work exactly as I had hoped.

The two-sided, stainless steel garbage can that I had finally bought — after a couple years of stalking sales — was terrific in many ways. Recycling divided neatly from garbage. The stainless steel was attractive and easy to clean. But, there was one little thing — the side of the divided can usually designated for recycling was too small and the garbage side too large. I have more recycling than I do regular garbage, so the recycling side always filled much more quickly than the garbage.

For more than a year, I observed these quantities of garbage vs. recycling. I took out the small recycling bags far more often than the garbage. Because i have to take them to a city recycling bin a couple miles away, I sometimes amassed two or three bags of recycling in my car before I drove near one of the recycling bins. Every time I loaded one of these small bags in my car, I would think, “I should really just switch sides.” I could use the larger side for recycling and the smaller side for garbage. The company that makes this handy household item even sells different colors of each size bag, depending on how you use the garbage can. They designed this garbage can to be used flexibly. I just wasn’t using it flexibly.

I finally switched sides about a week ago. More than a year after I bought the garbage can.

It works SO MUCH better! The garbage and recycling fill at more even rates. I don’t have recycling overflowing after only two days. It is easier to take the recycling in one large bag rather than several small bags.

I wondered, “What is wrong with me?” I’m someone who generally embraces change. I have even built a whole business around fostering calm, creative change in organizations. Me, the change “expert,” was unable to change something as simple as switching the sides of the garbage and recycling for more than a year.

The reality is that even for someone like me who usually likes change, breaking out of the expected norms and developing new ways of living are challenging. Our minds and bodies like routines. We like doing the same thing over and over again because it seems to be easier. We resist expending the mental and physical energy it takes to learn a new routine — even if its something as simple as taking out the garbage.

This dynamic also exists in groups of people. In fact, it is even harder getting groups of people to change. It’s not just a matter of getting one person to decide to make a change; you have to get many people to decide. And then (this is even harder) … actually implement the change. If we were going to tackle this garbage/recycling change in a hotel chain, we’d have countless meetings about the change, write procedures about the new way to collect garbage and recycling, and implement a training program to teach the cleaning staff the new way to use the new garbage cans and bags.