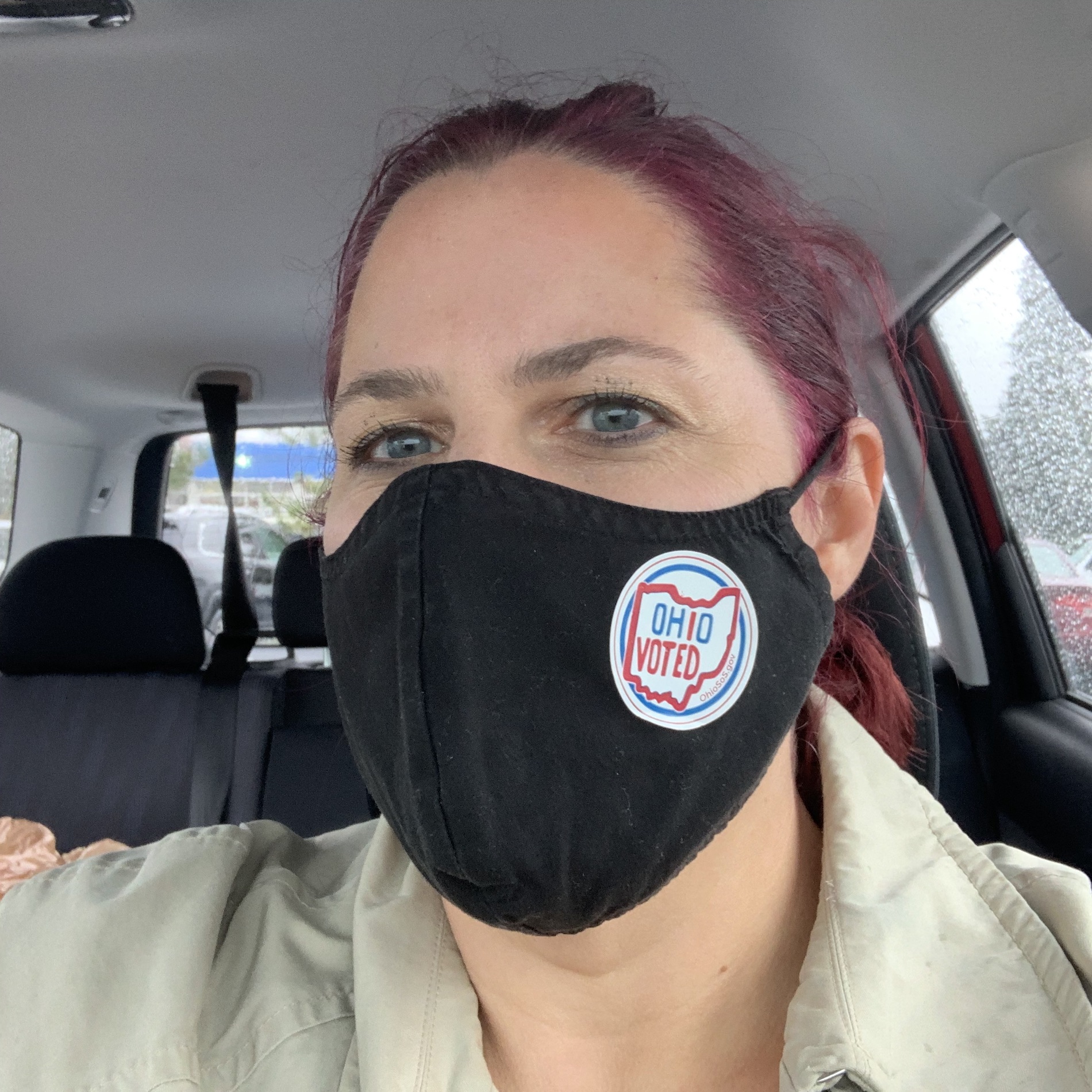 Leaving my car in the outer reaches of the enormous parking lot, I walked for what seemed like blocks toward the end of the line — wherever that was. Several other people were walking near me, craning their necks trying to catch a glimpse of where they should take a place to wait to vote at the Franklin County (Ohio) Board of Elections. We walked and walked and walked. A woman who was several steps ahead of me finally said in humorous exasperation, “Where the hell is the end of the line?” I replied, “That’s exactly what I was thinking.”

After crossing the yawning stretch of the parking lot we came upon a tiny woman wearing a reflective yellow vest, dulled by oppressively gray clouds and falling rain. She used her orange flag — not really visible until we were right near her — to point us to our new spot at the end of the line. This line to vote formed last Thursday morning only an hour after early voting opened. It snaked around this giant strip mall, wrapped around the back of the building and then coiled, like the tail of the snake in the largest space at the back of the building. I began thinking, “I should have voted by mail.”

Voting by mail would have certainly taken less time, but I would have missed this amazing spectacle of voter turnout. I’ve early voted at this election office before. I have never encountered a line of any significance. And other than the last mid-term election, I’ve rarely encountered much of a line to vote on election day in my nearly 30 years of voting.

People of all stripes — ages, colors, abilities and sizes — were actually standing out in the pouring rain for more than an hour on this late-October morning. Most voters had umbrellas, some didn’t, but most stayed in line anyway. Voters had masks to help protect themselves and others from the coronavirus, but still they kept arriving and stayed in line.

As time time wore on, my ungloved hands got cold and my arm tired from holding the umbrella. I started to give into a little grumpiness, even as I stepped — steady and regularly — toward the 150 voting machines and dozens of poll workers we were told were waiting for us. Instead of succumbing to self-indulgent complaining, I took a moment for mindfulness and felt into the minor physical discomfort. I let that discomfort plug me into the memories of the thousands of people who sacrificed their bodies protesting in the Civil Rights and Suffrage movements. Women fighting for the vote starved themselves in protest. They were imprisoned and forcibly fed by their captors in the early 20th century. Civil right leaders marched 54 miles from Selma to Montgomery Alabama in 1965 only to be met by hordes of well-armed police who brutally beat them on the Norman Pettis Bridge simply for insisting on African-American’s right to vote — a right they legally had.

The minor aches in my feet and numbness in my hands connected me to those ancestors who fought injustice so that I could vote. They had no idea who or what I would be in the year 2020. They knew only that the voices of women, African-Americans and other disenfranchised voters can and should matter. They had caught a vision that stretched the bounds imagined even by the signers of the Declaration of Independence — that even a system created by and for white, landowning men could apply to everyone. In that moment, this voting task on my to do list became sacred ritual — grounding me in the slightly uncomfortable present, connecting me to the sacrifices of ancestors of the past, and helping me imagine a future for people I couldn’t imagine and would never know.

This election cycle may be combative, difficult, frustrating, even unjust, but we are blessed to live through these remarkable times in which so many are becoming aware — perhaps for the first time — of the preciousness of the rights and responsibilities of democracy. Perhaps we can forge a new imagining that extends the bounds of freedom for those who come after us.

Need some post-election release? Join me for 60-minutes of renewing yoga and mediation via Zoom at 7 p.m., Tuesday, Nov. 10. Free, but you must register.

Special Deal: anyone who registers for any of my upcoming events before December 4 (yes – even the free ones) is eligible for three coaching sessions from me for only the cost of two. Save $100 and get some clarity around your next career moves – check the calendar and register for an event today! Deal only applies to new coaching clients.